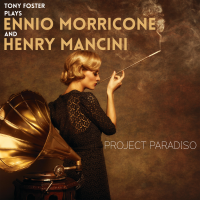 This is track 8 on the June 2016 release Project Paradiso: Tony Foster Plays Ennio Morricone and Henry Mancini by Canadian-born, Seattle-based, Juno Nominated pianist & composer Tony Foster. This is the only original composition on the album by Foster, and is a melody he composed with Henry Mancini's great themes in mind! The rest of the music features Foster's arrangements and adaptations for his piano trio of the music of the two film composer icons, Morricone and Mancini. Foster's inspiration for this album comes from his belief in the power of a strong melody. He feels many of these songs played such an integral role in the films they accompanied that removing them from those films would alter them immeasurably. The material selected combines well-known classics like "Love Theme From Cinema Paradiso," "Theme From The Pink Panther," with less-known but strong melodies like "A Flower Is All You Need," Theme From U Turn," "Deborah's Theme," and others! The album features Vancouver Canada's Joe Poole on drums and Seattle bassist Nate Parker.