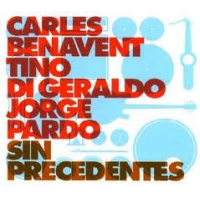 The Benavent-Di Geraldo-Pardo are performing as part of the V Festival de Jazz La Escalera de Jacob in Madrid, on its final night, the 21 March. The UK has Andy Sheppard, Spain has Jorge Pardo. Flamenco, smokey sax, rain hitting tarmac, pistola at dawn. Via Con Dias. Dark and awesome.

Benavent-Di Geraldo-Pardo - This trio rose as a continuation to a former group of Jorge Pardo and Carles Benavent, a sextet that made history in the new flamenco and went on tours to the most important jazz festivals from Vitoria to Montreal. With the arrival of Di Geraldo this excellent trio was formed, consisting of three authentic fusion masters of flamenco and jazz, whose album “Sin Precedentes” was awarded as the best jazz album in 2010 at the Music Awards XIV Edition.