Louie and Jazz by Gene Ludwig 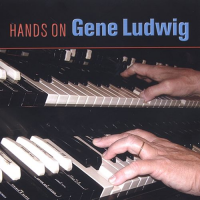 Composed by Gene Ludwig, in memory of his two cats, Louie and Jasmine.

"Tradition, the handing down of customs, beliefs and stories from generation to generation, runs especially strong among jazz organists. They are a select crew, after all, piloting Jazz' Spruce Goose, the technically marvelous Hammond B-3 organ, through the turbulence of time and popular taste. It's no easy feat, of course, co-ordinating hands and feet, keys and pedals with mind and spirit. It's no secret either that, when done right, the Hammond beast soars like nothing else. Its twists and turns, jives and grooves, speak, communicate and resonate with you. Academics call this 'soul-jazz.' Fans call it good music. Gene Ludwig calls it a career, a life's work. Playing organ since 1958, Ludwig's craft is an ongoing admiration of masters who came before, of traditions, of truth. Explaining it with words gets academic and dry. We'll let Gene explain it, let him take us on the ride."
-Germein Linares, All About Jazz