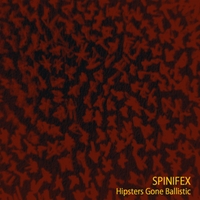 Sounds like a Hogmanay pipe massacre overseen by electric Miles and one too many Auchentoshan. Those naughty Niravalic Netherlanders.