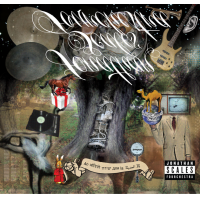 Jonathan Scales Fourchestra is an example of musical sincerity. Weaving together collective and individual influences without compromise, they are as much themselves as they are a unit—a crucial trait of landmark instrumental ensembles. Equally captivating is steel pannist and founder Jonathan Scales’ compositional skill as is his tasteful, avant-garde improvisational approach. Driftwood Magazine says "Scales is to steel pans ...what Béla Fleck is to the banjo—an über innovator."

Drummer and percussionist Phill Bronson drives the Fourchestra’s time-shifting, modern grooves with graceful polyrhythmic chops and the listening ability of a true master. (His talent has been praised by Victor Wooten, Oteil Burbridge, Chris Thile, Ellie Mannette, and others.)

Bassist Cody Wright, the group’s newest addition, rounds out the ensemble with a groundbreaking hybrid picking style stemming from his background as a highly practiced fusion guitarist. With gut-wrenching grooves and blistering, soulful melodic lines, Wright’s mix of flash and feel adds a unique depth to the Fourchestra.

Together, the group explodes onto stages with an indescribable sound that is as much felt as it is heard, and is said to have "a Thelonius Monk-like attitude with a Mozart creativity that works." (Pan on the Net) The group’s self-titled debut collaborative album features unparalleled sonic density and envelope-pushing compositions. Guest collaborators include Grammy winning masters Victor Wooten and Howard Levy (Béla Fleck and the Flecktones) and is fully orchestrated with horns and strings.