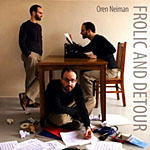 Frolic and Detour features nine new compositions of Neiman's and continue his blending of modern jazz sensibilities and middle eastern and other various rhythms. The album also features Kenny Warren on trumpet, Doug Drewes on bass, and Kenny Shaw on drums.