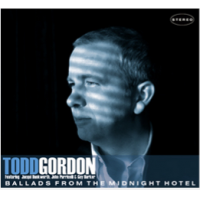 A rare duet version of the Gordon Lightfoot classic, released in 1970 and a million-selling hit. It comes from Todd Gordon's album entitled "Ballads from the Midnight Hotel" which was produced by Ian Shaw and Jacqui Dankworth was a guest for this track. The band featured Gabriella Swallow (cello), John Parricelli (guitar), Alec Dankworth (bass), Mark Fletcher (drums), Guy Barker (trumpet) and pianist/arranger, David Patrick.