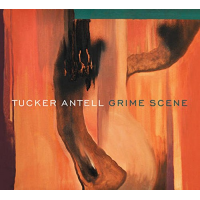 Same calibre joy as Michael Brecker's, Time Is Of The Essence. Rare soulfulness in a time of excessive grime scenes.

For Boston saxophonist Tucker Antell's debut recording, he looks to the rich tradition of the tenor sax/B3 Organ groups and his many influences and experiences with Jazz, Blues and groove-infused music he's spent the last decade performing across New England. His virtuosity on the tenor saxophone is undeniable, while his passion for this particular fusion of Jazz & Blues comes across in a fun and honest way: singable melodies, danceable grooves, and stretched, creative improvisations, with a few twists and turns along the way. From the churning shuffle groove of "Grime Scene," to the Cubist re-working of Monk's "I Mean You," or the unfurling slippery funk of "Madness," Antell's music strikes a fine balance between the head and the soul.

Grime Scene; I Mean You; Difference Maker; What You Mean To Me; The Hive; Madness; Rae; Home Stretch.