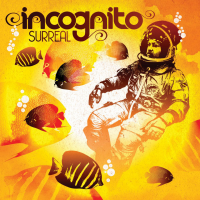 First single from Surreal, Incognito's 15th album. Some thoughts about it from bandleader Jean-Paul "Bluey" Maunick:

"Goodbye To Yesterday" featuring Mo Brandis, who also co-wrote and co-produced the track with me. The by-product of two creative minds a generation apart, proves that great melodies and well crafted lyrics hold the key to creations that have a timeless quality to them. This song could have easily been sung by Steve Winwood in the 60's, Stevie Wonder in the 70's, Michael Jackson in the 80's, George Michael in the 90's. The catchy horn lines arranged by Trevor Mires make the track even more hooky and immediate."

The Less You Know; Goodbye To Yesterday; Above The Night; Ain't It Time; Capricorn Sun; Don't Wanna Know; Restless As We Are; Rivers On The Sun; Don't Break Me Down; The Stars From Here; To Be With You; This Must Be Love; The Way You Love; Thoughtful Fantasies.