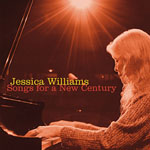 Jessica Williams' newest album more than lives up to its proud title with 8 originals by Jessica Williams and one seldom-heard chestnut by Sonny Rollins. The music is as new as the 21st Century and quite unlike ANYTHING Ms Williams has committed to CD before: in a program that spans all of the emotions, from longing, sadness, wonder, and optimism, to melting love, there are times when one may wonder if it's "just a piano" they're hearing. On "Toshiko", she manages to coax the sounds of a Koto or a Shamisen out of the instrument, all without any overdubs. The title tune, "First Wish", immediately fills you with the spirit of promise and positive change. Her heart-breaking "Fantasia" is a strong reminder of her extensive conservatory training and extraordinary touch, often compared to Bill Evans (and, more recently, to Glenn Gould) by JazzTimes critic Doug Ramsey. Still firmly rooted in her nearly 50 year love-affair with jazz, she offers her deeply-felt tribute to the memory of the great pianist Oscar Peterson, and rounds out the mesmerizing program with her original compositions containing soaring lines and rapid-fire sheets-of-sound that were inspired by the ground-breaking work of one of her strongest and earliest influences, saxophone giant John Coltrane.