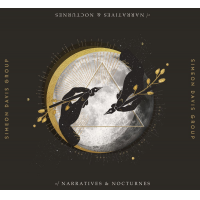 "Eden," like all compositions on the album, is completely through-composed, and uses elements of jazz, soul, and folk music to create an immersive narrative world. "Eden" traces the Judeo-Christian creation narrative using four distinct themes for the four main roleplayers: the voice of God (represented with a chord progression on the Wurlitzer), Adam (a theme that begins with solo male voice), Eve (a funky, groovy melody and aesthetic), and the Serpent (an angular, dark theme presented with the electric guitar). Over time, these four themes interact with and transform each other following the progression of the story, climaxing with the Serpent’s temptations - found in the electric guitar solo - and Adam and Eve’s decision, represented through the flugelhorn solo, before closing with them being cast out of Eden.