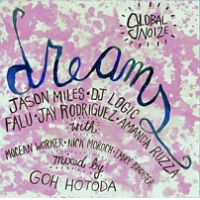 Album Title: A Prayer For The Planet
Label: Self Produced
Released: 0

As always, for AAJ's "Saturday The Fringes" series, it's something pretty different. This song has a wide mix of influences, looks forward to where it envisions music to be, and yet it's still something you can dance to.

Dreams is the new single from Global Noize- Jason Miles, DJ Logic, Indian Diva Falu, Amanda Ruzza and Jay Rodriguez are joined by Mocean Worker, Nick Moroch and Emily Bindiger to create a new song for their Genre bending Group Global Noize that expresses where we are at as a people in 2012 and where we are going-All wrapped around an amazing musical tapestry. Mixed by Goh Hotoda.