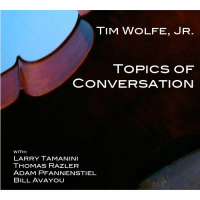 Topics of Conversation, like what happened to Donna? Bella Donna or Donna Bella? Non lo so.... This probably caused it, https://www.youtube.com/watch?v=lNLBToUKXno Donna worry.

"Donna's Blues" is medium-up be-bop blues featuring all members of the band, and is the third track on Tim Wolfe, Jr.'s debut album, Topics of Conversation, set for release on March 25, 2014.