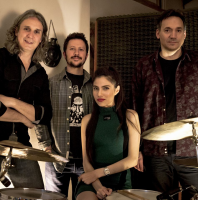 Sol y Los Terrestres is a recent independent project composed of musicians from Argentina, with extensive activity in the Buenos Aires city underground circuit; led by the voice of the talented and young singer Sol Cansino, along with Javier Garcia (guitars), Hernán Barone (synth bass & keyboards) and Mariano de Hoz (drums). The music of Sol y Los Terrestres is furrowed by the spirit of the new Argentine song, and the influences of the R&B universe; Currently, in parallel to their live performances, they are in the process of producing and recording their studio album. The band's beginnings go back to concerts, in which Hernán Barone and Javier Garcia were already gathered on stage playing instrumental music, and in one of these shows, Sol Cansino was invited to sing. The musical and human chemistry was instantaneous, and the restlessness of beginning to formalize the project for the coming year was sealed. After some changes, with the entry of drummer Mariano de Hoz, the group's stable formation is formed. Then, from there they start with frequent live performances, produced independently, in which they settle their style, and developing and premiering their own compositions. The sound of Sol y Los Terrestres has been given in a very distinctive way due to the particular mixture of the diverse stylistic origins of its members. Sol Cansino with a vocal school with a strong imprint on African-American vocal harmonies; and Hernán, Javier and Mariano, are instrumentalists who usually dabble in languages such as rock, R&B, jazz and Argentine music.