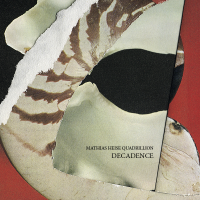 Bite you, it's funky business, a pulse and everything. H'Jah'lulah it's alive!

'Decadence' is the title track of Mathias Heise Quadrillion's recent album released June 2017. The album features own compositions only, and is produced, mixed and mastered by acclaimed L.A. producer Erik Zobler, who is known for his longstanding cooperation with George Duke, among many others. The result of the amazing collaboration with Erik Z. is an album of exceptionally high sound quality, and we are extremely proud of it!