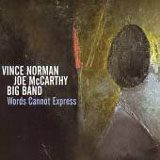 After happening upon this exhilarating track in our archives, I decided to re-feature it for Big Band Friday. It's the immense sound that I think I love most about big band compositions, and this track nails it right from the start. Just a breathtaking tune. I'll be looking to feature a new release from these guys in the near future, but for now, enjoy this older tune.

Multi-instrumentalist Vince Norman and drummer Joe McCarthy gather together some of the finest big band players on the eastern seaboard to create a creative and swinging album of modern jazz. Part big band and part small group workings, the album balances the intensity of the big band with wide open improvisations on nine original compositions by Vince Norman.