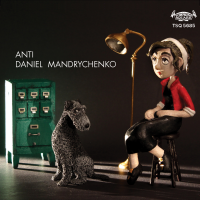 Clunky, prowess raising jazz intro, with an easier to access guitar feature followed by intricate double fisherman's knot work from the sax. As a track from 'Anti,' it does what it say's on the tin.

Daniel Mandrychenko is a multi-genre guitarist from the Bay Area. For his debut, Daniel chose producer Adam Munoz, known for his work on multiple Grammy-nominated Bill Frisell records. Evan Williams (d) and Danny Castro (b) cut their teeth with some of the Bay Area’s best musicians. Dann Zinn (tenor sax) has over 100 appearances as a featured soloist and sideman. 'Anti' is one of the last albums ever recorded at Fantasy Studios - a remarkable musical statement from this promising young guitarist.