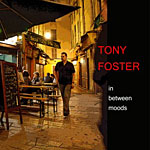 Album Title: In Between Moods
Label: Self Produced
Released: 2009

This Oscar Peterson composition is the second track from my 2009 trio debut release entitled In Between Moods. Though the track is called "Cakewalk," I can tell you it's not exactly a "cakewalk" to play! Recorded in Vancouver, BC, Canada with Russell Botten on bass and Joe Poole on drums. As a jazz pianist, it's difficult not to be influenced by Oscar Peterson...I'm a longtime fan of not only his playing, but also his composing!