Brooklyn Elegy by The Jazz Thieves 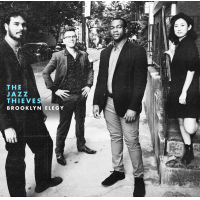 The Jazz Thieves, inspired by their heroes Duke Ellington, Tom Waits, Bill Withers and Ray Charles, "steal" the feel, fire and fervor of 70's soul, 50's R&B, church gospel, and Mississippi Delta blues, uniting it with jazz improvisation and imagination. Their music is a modern exploration of the many stories, voices and styles that comprise and influence jazz. John Gray, the bassist, bandleader, composer, lyricist, and producer of The Jazz Thieves explores these styles in “Brooklyn Elegy”, using them to help tell his story. These stories originate from the 7 years after John graduated from Manhattan School of Music; they tell the tale of trying to make friends in a new part of town, grow as a person and musician, and eventually, finding love in Park Slope, Brooklyn. The album “Brooklyn Elegy” evokes a coming of age; wading through the changing neighborhoods in a gentrifying Brooklyn, navigating infrequent employment, meeting colorful characters, and surviving ups and downs. The title track, Brooklyn Elegy, is inspired by the the interactions between the 20-something musicians and one of the older ones in Brooklyn’s independent rock n’roll scene.

track of the day Brooklyn Elegy Self Produced The Jazz Thieves