Blues for H and A by David Detweiler 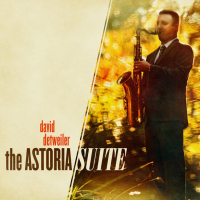 The Astoria Suite began as a series of individual compositions – moments of beauty, observation, and reflection brought about by Detweiler’s newfound perspective. Over time, these distinct pieces began to become something more, as themes, melodies, and rhythms began subtly overflowing from one to the next, creating an undercurrent between them that bespoke a unified narrative. With Astoria as the common thread, these pieces became interwoven until they were undeniably more than a mere collection, and thus became the Astoria Suite.