Bird's Up by Carlos Vega 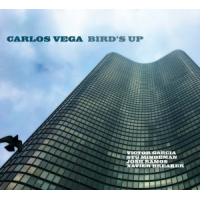 Established, fluid playing, with the enthusiasm of the traditions originators.

The follow-up to saxophonist Carlos Vega's high-spirited 2016 release, "Bird's Ticket," brings him back to Chicago from his Tallahassee home to reconnect with the same group of Chicago's finest - Victor Garcia on trumpet, Stu Mindeman on piano, Josh Ramos on bass, and drummer Xavier Breaker - for a set of ten wide-ranging originals. Entrenched in Miami's Latin music scene in the early 2000s, the eclectic and electric musical experiences from that period helped form his unique approach that carried through later work with Arturo Sandoval, Ira Sullivan, & Tito Puente, and informs his composing and performing aesthetic now. Carlos is currently on the faculty of Florida A&M University and is a member of the Chicago Afro Latin Jazz Ensemble and trumpet legend Doc Severinsen's Big Band.

track of the day Bird's Up Origin Records Carlos Vega