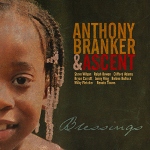 Founded in 2004, Ascent is a jazz collective dedicated to the performance of original new music by Anthony Branker. The music on "Blessings" was composed during a residency at the Estonian Academy of Music where Branker represented the U.S. as a Fulbright Scholar and features some of the most significant jazz artists working today, including saxophonists Steve Wilson & Ralph Bowen, trombonist Clifford Adams, Jr., vibist Bryan Carrott and pianist Jonny King, among others. The group's recording "Spirit Songs" was released in 2006 and was named as one of the Top 10 releases of that year by the Jazz Journalists Association.