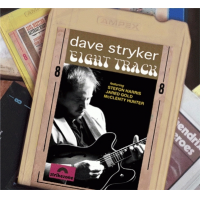 This is ace, a magic team of musicians and no hippie dancers in sight. #Hairshmair

Dave Strykers new CD Eight Track is a celebration of classic pop tunes from the 70’s reimagined by his working trio of Jared Gold on Hammond B3 organ, and McClenty Hunter on drums with special guest Stefon Harris on vibraphone.

Stryker writes, ” in 1975, like many people, I had an 8 Track player in my van, where I remember sneaking out of class to listen to music. I started getting into jazz and a friend, (who actually had an 8 track recorder) made some tapes for me. I remember one with "Kind of Blue" and "Bitches Brew" on the same tape and another with Pat Martino, George Benson and Carlos Santana! Now 8 Tracks didn’t last that long, (always skipping to another song, and having to stick a matchbook in there to get them to play...), but to me they represented the 70’s – a time when there was a lot of great pop music going on as well as jazz.”

“I enjoy occasionally throwing a pop tune from those times into my sets and recordings, probably because when I was coming up and learning how to play jazz the older guys would play those tunes in their sets as well. it was a way of connecting with people. I used to joke on the bandstand “That last tune is from my next record- Dave Stryker plays the hits of the 8 Track”.... Well, be careful what you say because it might happen!”