A Night In Calisia by Randy Brecker 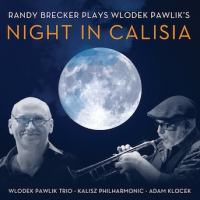 Brecker waves in utero makes music junkies. Proven. Could watch the film to this sound track all day. Lovely combination of musicians.

Multi-Grammy Award winner and jazz legend Randy is back and sounding ‘sweeter’ than ever with a heart-touching musical ‘celebration’ with the Wlodek Pawlik Trio and full orchestra, written and brought to life for Randy by the multi-talented Polish composer and trio leader, Wlodek Pawlik! This recording is the result of a musical contribution to the celebration of the 1850th anniversary of Kalisz, the oldest city in Poland. The culmination took place in June of 2010 with a concert called ‘’Night in Calisia’’. The event was such a success the musicians decided to go into the studio to record the project nearly two years after the concert. The result is a heartwarming work of art - The world premiere of a truly special project celebrating the city's anniversary. Randy Brecker, Wlodek Pawlik Trio, Kalisz Philharmonic and Adam Klocek, conductor.