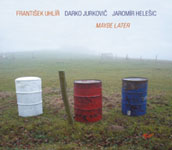 Bassist Frantiŝek Uhlíř, drummer Jaromir Helešic and guitarist Darko Jurković made a strong impact with Jazz at Prague Castle 2006 (Multisonic, 2006). They return to entice and lure with another tidy bag of tunes of which seven are originals and two are standards. While all the originals sit compactly in the mainstream, the trio finds its muse and inspiration in various strands that include swing and some fertile bop. Their impeccable sense of time and cohesive improvisation gives the album a nice balance and shows how comfortable the trio is in getting the music to spring alive and communicate with the listener.

Each member contributes to the success of the band. Uhlíř has a lissome sense of timing. His pliancy not only lets a tune breathe, it gives the other musicians the room to rove and find that empathic chord. Jurković uses the two-handed tapping technique to play the guitar. That in itself would be par for the course, but it is his creativity that extends the parameters and illuminates his skills. His notes are radiant and uncluttered, and he swings with ease. Helešic's drumming is tasteful. He is never intrusive, but he propels the rhythm and gives the music its undertow and drive.

The trio gets off to a swinging start with "Maybe Later." Jurković leads the charge—his notes juicy and thick, falling in a rainbow of colors. He makes it all the more telling with empathic notes that stamp the groove. Uhlíř rumbles under the line, keeping his intonation deep but blessing it with pliancy. In doing so he shades the contrasting approach of Helešic, who uses the crisp intonation of the cymbals and percussion to keep the bottom line prancing.

Uhlíř anchors "Waltz for Sunny" with his resonant bowing. It is a well constructed tune with a becoming melody that inspires Jurković to improvise within its frame. Helešic rings it up with his brisk accents.

The group turns to bop on "Blues for Franta," where Jurković's instinct and drive are sure. He elevates the tune as he leaps into interesting alleys and comes up with a rich lore of motifs. The mood turns mellow for "I Married an Angel." The standard is given its due with a sympathetic reading that does not undermine its soul and pulse.

Eloquence underwrites the music and fills it with radiance.