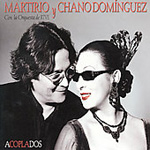 Self-professed "fusions" of various musical forms in jazz are routinely and often justifiably treated with suspicion by critics and fans. The formulas employed for these events can be either fruitful and satisfying, or a recipe for utter pretentious disaster. Fortunately, Acoplados falls into the former category, with the unlikely but fascinating placement of traditional Spanish music within a brassy, swinging context.

Spanish vocalist and actress Martirio, who has been no stranger to mixing musical styles over the course of her 25-year career, is joined by pianist and arranger Chano Dominguez and those Spanish civil servants of swing, the RTVE Big Band and Orchestra—a state-run organization with many fine soloists whose contributions are criminally uncredited in the CD packaging (although they are listed below and on Sunnyside's website). Bassist George Mraz and drummer Guillermo McGill round out an agile and accomplished rhythm section.

In this context, such genre-stretching is not so far-fetched, since adapting traditional copla songs (which pre-date flamenco all the way back to medieval times) is not unlike the efforts of 19th Century classical composers, who blended folk songs into their compositions as a means of forming distinct musical identities for their respective nations. And, of course, the jazz greats of yore routinely adapted Tin Pan Alley tunes for jazzy purposes.

"El Agüita del Querer" echoes Gil Evans' arrangement of "New Rhumba" with its steady rhythmic pulse and stop/start vamp, pretty much setting the tone for the whole album. The torch blues feel of "Locura de Mi Querer" is a dead ringer for a classic Dinah Washington track, with its loose feel and uncannily timed brass hits. Two up-tempo numbers, "No Me Digas que No" and "Compuesta y Sin Novio," strongly retain their copla roots as syllables fly by at a dizzying rate and a hint of flamenco phrasing can be heard in Dominguez's piano.

The overall result is more Broadway than Birdland, but after all, many of these selections are torch songs, albeit five hundred-year-old ones. Although Martirio does not possess a natural feel for swing, it doesn't really matter in the end. She has a finely honed, robust and haunting instrument that makes this recording something special.

"Ojos Verdes" and "La Bien Pagá" display Martirio's considerable range as a vocalist, with a command of dynamics and phrasing that are particularly arresting when she dips into lower registers. The lush string arrangements cradle her skillful, dramatic delivery. The disc closes on a sombre note with little relation to jazz, but the last piece is one of the best tracks on the album. "Nana Vidalita de Filigranas" combines a gorgeous, dirge-like orchestral arrangement with a mournful, superbly delivered vocal. It sends chills up the spine.

One might consider the Charlie Parker sides with strings as a comparison: Mitch Miller and the assembled musicians did their thing while Bird did his thing on top without a detectable hint of an alteration of his style. So it goes with Acoplados, except in reverse. Both traditional Spanish folk songs and big band timbre come together, and neither style is diluted one whit—they combine to create something that, while far from seamless, is pretty damned interesting.

These are simply great traditional songs with arrangements that harken back to another era—an American era of dance bands with girl singers like Martha Tilton or Doris Day—if they sung in Spanish, and if the Benny Goodman Orchestra were dressed in medieval chain mail gig uniforms. Panache and the wholly original concept carry the day on Acoplados, one of the most intriguing releases of the year.

Ken Kase is a musician and critic who lives in St. Louis, MO.