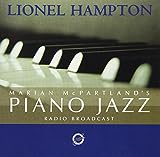 For over twenty years, jazz pianist Marian McPartland has hosted NPR's Piano Jazz, a radio broadcast that showcases some of the most important artists in jazz history. Piano Jazz not only presents McPartland's piano playing along with the music of jazz greats like Bill Evans and Dizzy Gillespie, but it also provides a forum for her to engage in informative and delightful conversation with guest artists about their lives in the colorful world of jazz.

On Marian McPartland's Piano Jazz show with guest Lionel Hampton, the well-known vibraphonist discusses his milestones in jazz, from backing up Louis Armstrong (where the trumpeter encouraged Hampton to play the vibes for the first time) to his tenure with the famous Benny Goodman Quartet.

The interaction of musical dialogue between McPartland on piano and Hampton on vibraphone is just as enlightening as their talk. "Sweet Georgia Brown," also known as the theme song for the Harlem Globetrotters, highlights McPartland's keen sense for melody inside great stride playing. "Sweet Georgia Brown" also features soulful scatting by Hampton and a vibraphone outro.

"Midnight Sun" is a Hampton original that feels special as a duet with McPartland and Hampton. The piece is gentle and filled with cascading notes and lively appreggios.

In one part of the conversation with McPartland, Hampton explains his first meeting with Benny Goodman at the Paradise Club in Los Angeles during the early '30s. "One night I was playing," said Hampton. "And this guy was playing clarinet beside me and I said 'Gee whiz! Who is that!' It was Benny Goodman." Later in November of 1936, Hampton finally joined the Benny Goodman band. Hampton's membership in the Goodman quartet yielded the first interracial jazz band that was largely accepted by white and black audiences.

The rest of Piano Jazz With Lionel Hampton is filled with duos between McPartland and Hampton, more insightful conversation, and a cover of "Mack The Knife" where Hampton scats like Satchmo.