By MIKE PERCIACCANTE
July 31, 2011
Sign in to view read count
Marc Broussard
Great South Bay Music Festival, Shorefront Park
Patchogue, NY
July 17, 2011
On a very warm but pleasantly windy Sunday evening by the bay, Carencro, LA native Marc Broussard was the penultimate performer at the 2011 Great South Bay Music Festival, bringing his patented brand of Bayou soul to Long Island, NY. While much of Broussard's audience was there to see him, others had come early to the Blue Point Brews Stage in the hopes of getting a good vantage point for the festival's closing act, 38 Special.
Once Broussard and his band hit the stage and kicked into their eclectic set, with Broussard's larger-than-life, soulful and bluesy voice filling the air, the attitude and composition of the audience began to change. Drawn to the stage by the gumbo of Broussard's music—a touch of blues, a dash of Cajun-influenced funk, a sprinkle of jazz, pop, some good old fashioned rock 'n' roll, and a large helping of Americana—the crowd was quickly transformed from a small number of faithful fans and a large number passing time, to an audience of devotees to his classic R&B, rock and soul grooves.
Though his newfound fans could not necessarily categorize his unique sound, it was quite the scene, as they flocked from all over the festival grounds to see and answer the question that was on their tongues and lips: "Who is that?" As his smooth yet husky vocals filled the park, the band's syncopated rhythms mesmerized the crowd. 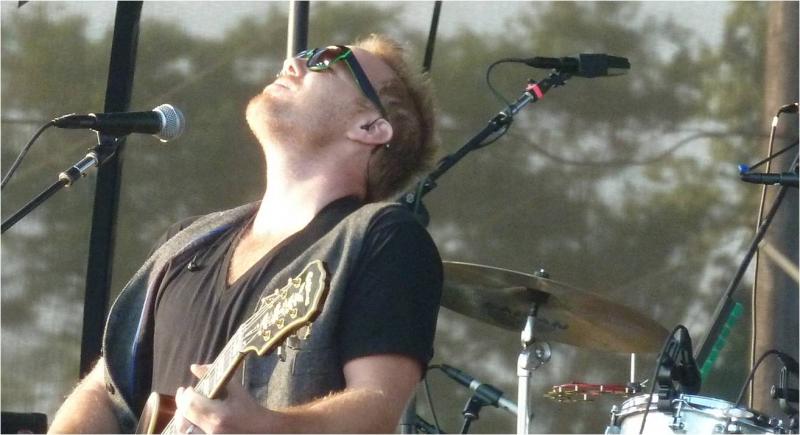 Broussard seems to cosmically and intuitively know that his fan base is drawn to his back-country bayou, blue-eyed soul and melodies, from all walks of life. On this night, his newfound fans—who, at first glance, didn't necessarily fit the expected demographic (most appeared to be older southern rock fans, with Broussard sandwiched between Street Survivors with Artimus Pyle, and 38 Special)—thoroughly enjoyed his hour-long set. By the end it was apparent that his crowd—which danced, boogied, sang along with and swayed to a set that included "Lucky," "Love and Happiness," "Hard Knocks," "Come In From the Cold," "Home" and "Only Everything"—wanted more; it was also immediately apparent, by the smiles on their faces, that no-one was unsatisfied by this stellar performance.