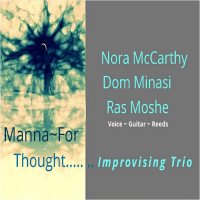 This is the house that Ornette Coleman built some 60 years ago. Guitarist Dom Minasi and his like-minded colleagues, vocalist Nora McCarthy and saxophonist Ras Moshe, show that the free jazz tradition is very much alive as we approach the third decade of the new millennium. Minasi has for the past 20 years, progressed further into the heart of improvisation, sporting a round, fuzzy guitar tone that seems to proceed from slow melodicism to light-speed electron sparking off the edge of what he is creating. The Improvising Trio, as they call themselves, are not perfectly free, relying on some music al guidance on Manna for Thought. A certain telepathy exists between the three musicians, and that telepathy accounts for the thread of integrity passing through the six selections featured here.

Manna for Thought features six improvisations that are at once dissonant and dysphonic, but retain an organized sensibility. Listening to "Lesson in Compassion" and "I See/You" a new counterpoint emerges, one reminiscent of the instrumental interplay used in the traditional jazz of New Orleans and Chicago. All three musicians are allowed plenty of room to move and do so empathetically among themselves. This type of group improvisation can be instantly revelatory, or it can offer revelation over time. Manna for Thought belongs to the latter of these types. Multiple listenings reward those with open ears something new each time. One cannot ask for more of music.