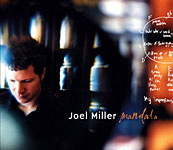 Psychology icon Carl Jung believed that the Buddhist Mandala—a circle enclosing a square with a deity on each side—was representative of the "nuclear atom" of the human psyche, the unknown essence of the soul. Ever-pervasive in dreams, children's drawings and more, he felt this simple representation depicted humanity's way of forming a harmonious relationship with the self, a means of reconciling with the tenebrous core of the soul to encourage healing.

For Canadian saxophonist Joel Miller the concept of the Mandala has manifested itself in a series of compositions that are based on simple melodic sketches in an almost folk-like context, making his latest release, Mandala , a curious and richly rewarding effort.

"Swing la Bas Caisse," for example, begins with Kurt Rosenwinkel, guest on five of the fourteen Miller compositions, strumming simple rudimentary major chords, which any newcomer to the instrument will know, on acoustic guitar. But before long he layers a slightly more oblique electric rhythm as bassist Fraser Hollins and drummer Thom Gossage enter lightly, creating an airy yet infectious groove that has its reference in African Highlife music. Miller and Rosenwinkel demonstrate just how far a harmonically straightforward context can be stretched, with Rosenwinkel in particular straddling the line between lyricism and invention. Rosenwinkel is unquestionably one of the most forward-reaching guitarists of his generation, blending a strong knowledge of the jazz tradition with broader concerns that give him a distinctive voice in any setting.

Miller, too, understands how to blend his roots into a more contemporary context. "Cabeza de Vaca" incorporates subtle electronics into an urban groove where Miller, trumpeter Bill Mahar and Bruno Lamarche, who contributes flute to the theme but ends up on tenor saxophone in a tandem improvisation with Miller's soprano, build a lush texture that feels bigger than it is. And while the composition is based around fundamental pentatonic or five-note scales, Miller effectively uses modulation to develop them into something more substantial.

While pieces like the lightly-swinging jazz waltz "Shopping," again featuring Rosenwinkel layering his thick and warm electric tone with a finger-picked acoustic, are lengthy compositions that give the soloists plenty of breathing space, there are a number of tracks more akin to musical miniatures that still manage to have a lot to say. "War con U.S.A." may be less than two minutes long, but by combining its Middle Eastern theme with a foreboding rhythm, it creates a surprising sense of unease, succeeding in being a cogent and concise reflection of Miller's political views. "Let's Go Shootin'" uses humor to make its point, while "Step into My Office" features loose interplay between the horns, recalling some of Dave Douglas' lighter work, and "Aqua Land" cleverly wraps quotes from Charlie Parker's "Anthropology" and Jimmy Heath's "Gingerbread Boy" in a more relaxed improvisational setting that gives Mahar an opportunity to stretch.

Accessible without pandering, naïve yet sophisticated, if Mandala represents something of a turning point for Miller, then it will be interesting indeed to hear what he does next.