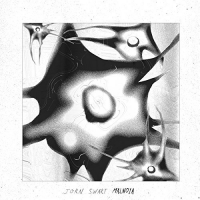 The debut from Dutch pianist Jorn Swart—A Day In The Life Of Boriz (Mainland Records, 2013)—presented music with an eccentric tilt crafted by a fairly conventional quartet. This sophomore date continues along an offbeat path, delivering an incredibly absorbing collection of curious curios, but it does so with a less-than-conventional instrumental line-up in place.

Malnoia turns the idea of the piano trio on its head. Swart forgoes the hustle and bustle of drums and the ballast of a harmonically and rhythmically astute bass, choosing instead to put viola and bass clarinet in his piano's orbit. It's most definitely an atypical combination, but it proves to be an inspired one that pays off in startlingly wondrous ways.

This instrumentation allows for Swart and his band mates—violist Benjamin Von Gutzeit, of Turtle Island String Quartet fame, and multi-reedist Lucas Pino, solely on bass clarinet here—to break free from traditional roles. They don't waste the opportunity, as all three indulge in beautiful eccentricities. That's evident from the first seconds of the record, where Pino's bass clarinet evokes the doleful cry of the titular mammal on "Elefante Triste." It's an odd way to start, but it serves as a fitting introduction to the beautifully glum creation that grows from it. Then there's "Walsje," a funhouse waltz with some blowing room and a few minor curves; "Feldmania," a searching scenario which seems to lean toward and learn from the indeterminate musical philosophies of the late Morton Feldman; "Hindemith," a number that swims both in rhythmic currents and open waters while making no secret of its influence; and "Odd Christmas Song," painting an eerie and dreary picture of the holiday season.

A chamber aesthetic runs through this entire program, but the staid sentiments that can often accompany such an approach are nowhere to be found. Take the canon-influenced, Baroque-inflected "Riddle," for example. It's a song that's readied for the concert hall but ripe for explorative unwrapping. The same can be said for any of the aforementioned numbers, a "Students Of The Macabre" largely grounded by an ostinato in nine, and a minimalistic "Meditation in C" that opens with ukulele-like viola strums before it builds hypnotically in layers and thins out to allow for further development. Rather than align himself with a specific musical methodology or stylistic camp, Swart takes full advantage of the gray area that his trio inhabits, building off of classical foundations and jazz impressions all at once. Malnoia is brimming with cryptic gifts and Delphic designs that manage to fascinate and confound. It's a record that becomes richer and more meaningful with each and every listen.