Eugene Marlow: Making the Music Our Own 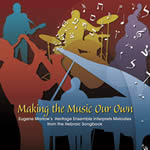 Jazz pianist and composer Eugene Marlow reinterprets songs from the Jewish vernacular on Making the Music Our Own, along with a mainstream trio and quintet. The first five tracks were recorded in 1986 with a bassist and drummer whose names have been lost. The next four were recorded in 1995 along with the personnel listed. Marlow's interpretations carry a deep, exotic flavor that recalls the lasting thrill Duke Ellington and His Orchestra gave the world through Juan Tizol's "Caravan. Other great composers have brought similar themes to the broader public, but Marlow places his emphasis on the secular music of Judaism.

The jazz trio reinterprets Hatikva, Israel's national anthem, with an "All Blues mood that swings lightly in three. Marlow's percussive piano gives the piece a majestic texture, while bass and drums exert a propelling force, driving the revered theme forcefully with a lively, foot-tappin' rhythm that comes alive in its jazz trappings.

The moody "Afa Hu Hashem features Meader's soprano and warms the heart. All spiritual music works that way, and Marlow ensures that his jazz treatment remains solemn. He closes with a straight-ahead, bebop-driven "Hinei Ma Tov, which swings with a positive aura. The interpretation, which somewhat resembles "Love for Sale, features a lovely piano interlude that sizzles with a loose, casual attitude. Marlow and Meader close it up while trading fours in the standard jazz practice. By interpreting melodies from the Hebraic songbook in a mainstream jazz format, Eugene Marlow has discovered an excellent application of universal communication. It works.

Visit Eugene Marlow on the web.