Randy Sandke and the Inside Out Jazz Collective: Mainstream Meets the New Music 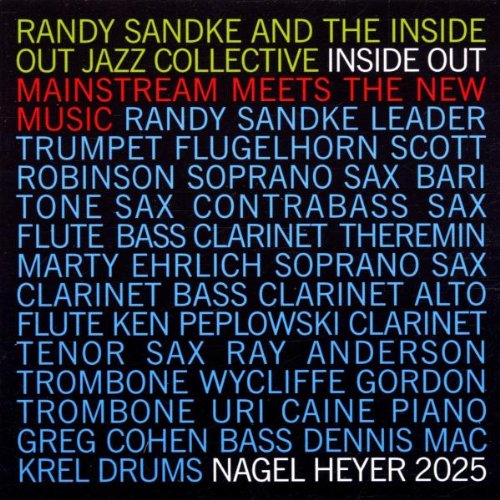 The result is some decidedly different mix of sounds laid down on the same tracks. This is apparent right from the outset with "Like I Said" which kicks off with a modern understated motif before Sandke and his crew arrive in the scene to take the music down the swing lane, led by the Sandke trumpet. But the scenery changes as Marty Ehrlich kicks in with his bass clarinet before giving way to the almost classic jazz trombone of Wycliffe Gordon.

"Inside Out" has the feel of an updated version of "Slaughter on 10th Avenue," once more with both sides working their ideas. This time Sandke is joined by Peplowski and Robinson, with the old meeting the new in the persons of Ehlrich, Anderson, and Caine. Ehrlich explores the possibilities of the soprano sax and Anderson shows his cunning with the modern trombone. Anderson also shows he can play "old" style on a swinging "Sisyphus Effect."

As one might anticipate, Uri Caine's "Whispers in the Night" borders on the classical mode of music and in a way, offers a case of role reversal. Sandke is by no means a novice when it comes to modern compositions. His probing, thrusting, jagged trumpet offers an unsettling counterpoint to Robinson's soprano. The one non-original on the musical agenda, Ellington's "Creole Love Song," is a welcome island in this sea of modern jazz. It's played straightforward with the opening recalling Bubber Miley's trumpet before Robinson steps in with the electronically contrived theremin. The proceedings eventually return to the original arrangement with the emphasis on reeds, horns and melody.

Make no mistake about it, this is album is a shaker, mixed with diverse type of music and musicians—and it works only because all of them have the ability to play just about any style of jazz with anybody of like skills. A recommended adventure.