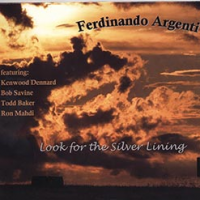 Ferdinando Argenti, who originally hails from Pisa in Italy but now resides a few miles outside of Boston, is a musician of diverse talent, not just in his piano playing and singing, but also in his compositional skills. The opener Chick Corea's "Friends" is an homage to its composer, replete with sprightly, florid lines played at an engagingly moderate pace. Meanwhile his own "Pitero" sees Argenti employing a melodica, a relatively rare instrument in jazz and which provides a harmonica-like melody line over the piano part. Here, as on other tracks Argenti sings sensitively in a voice which recalls the customary higher registers of Chet Baker or Mel Torme. Argenti's "The Walk" is a lively instrumental contrasting sharply with the easy-paced song "Oh, You Crazy Moon." By contrast, "Softly, As In A Morning Sunrise" is given a no holds barred rendition.

The ballad "Cos' Hai Trovato In Lui" signals a change of mood with Argenti's sensitive vocals delivering the song's Italian lyrics with an equally delicate piano accompaniment. With what is emerging as an alternating choice of slow and fast paced numbers, "The Curse of an Aching Heart" speeds up the proceedings considerably with this swinging song. Argenti's self-penned instrumental "Soul Hero" sees the pianist really stretching out and displaying his impressive improvisational ability.

The title track, sung delicately by Argenti, is once again augmented with a melodica line. Sammy Kahn's "A beautiful friendship" is given an effective and forceful treatment with Argenti's scat singing embellishing the groove laid down by piano, bass and drums. The set concludes symmetrically with "Amici," a romantic version of Corea's "Friends" but adorned with Argenti's lyrics written and sung in his native Italian with a touch of melodica to complete the piece. The selection presented here oscillates from slow ballads to fast instrumentals but this is no bad thing as it offers a very comprehensive overview of Argenti's notable gifts as a pianist, singer and composer. This is a very fine set indeed.

Friends; Pitero; The Walk; Oh, You Crazy Moon; Softly, As In A Morning Sunrise; Cos' Hai Trovato In Lui; The Curse of an Aching Heart; Soul Hero; Look For The Silver Lining; A Beautiful Friendship; Amici