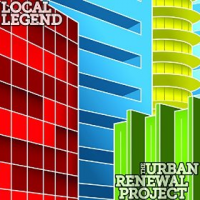 If high spirits and good humor alone could carry the day, Local Legend, the second album by the California-based Urban Renewal Project, would earn five stars for candor and commitment. The group is comprised of talented musicians (twenty-seven in all) who believe in what they are doing and give every one of the album's nine numbers their best shot. On the other hand, the music ranges from pop and rap to funk, blues, R&B, soul and hip-hop, offering little in the realm of satisfaction for those who are partial to more customary forms of big-band jazz. The URP has its own forward-leaning agenda, one that well suits its cordial persona, and within its boundaries evinces a strong and articulate voice.

Perhaps that should read "voices," as the most prominent and often-heard edicts are those of vocalist Aubrey Logan and rapper Elmer Demond who are featured, alone or in tandem, on every selection. While the lyrics, such as they are, are often opaque, Logan and Demond make up in spirit and sincerity for what may be lacking in depth and clarity. Logan is out front on "Change" (arguably her most engaging turn), Demond on "You're Beautiful," "Redshift" and "The Belief," and they share center stage on "My Own Way," "Rooftops & Parking Lots," "Make Like You Mean It," "We Big Tonight" and "Prophecy." The band, for its part, blows up a storm behind them, brash, brassy and rhythmically robust, as this music should be. While there are solos—including three by tenor saxophonist R.W. Enoch Jr., URP's de facto leader who composed every song—none rises above the level of ordinary. But inspiration, not improvisation, is what this band is about.

Enoch also wrote whatever lyrics aren't "rapped" by Demond, and as noted, they serve for the most part as window dressing for the band, even though some members of the younger generation may find them pertinent and perceptive. Speaking of which, members of that age group are the ones most likely to be drawn to and charmed by Local Legend. That is neither good nor bad, simply a fact. URP is a likable band that plays its chosen music well. It should be noted, however, that Local Legend runs for only forty-two minutes, rather brief for a late-model CD.

My Own Way; Rooftops & Parking Lots; Make Like You Mean It; You’re Beautiful; Redshift; Change; We Big Tonight; Prophecy; The Belief.

About The Urban Renewal Project