BY JOHN EYLES
December 1, 2019
Sign in to view read count 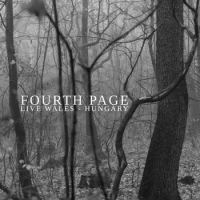 Live Wales—Hungary comprises in-concert recordings from gigs at Cwm Gwilym School House, Powys, Wales and Jazzaj, Lumen, Budapest, Hungary during a November 2018 tour. For the tour, Fourth Page's established core quartet of guitarist-vocalist Charlie Beresford, pianist Carolyn Hume, bassist Peter Marsh and drummer Paul May was expanded to a quintet or sextet by the addition of guests; Wei-Ya Lin was present on viola for all of the tour gigs, with classically-trained cellist Sonia Hammond only joining them on three tracks recorded in Wales, notably "A Light, a Bird," the album's longest piece at nearly seventeen minutes, and one of its many highlights. Not only did the guests even up the sextet's gender balance, their presence also meant that the sextet contained two long-standing duos, Hammond partnering Beresford in the duo Beresford Hammond, and the duo of Hume and May dating back to the millennium. The additions are in keeping with the changes to Fourth Page that were noticeable when they reconvened in 2017 after a four-year sabbatical to work on other projects, changes which included greater use of electric instruments and electronics. Crucially, the guest players are comparable with the core four, so they are in no way subservient but improvise on a par with the other ensemble members, blending in and displaying impressive improv skills. The bowed strings of viola and cello subtly alter the soundscapes emanating from the group but without fundamentally changing them. Bassist Marsh sticks to bass guitar these days rather than the double bass he once favoured, rather a pity as the combination of double bass, cello and viola would make intriguing listening. Charlie Beresford's vocals, one of Fourth Page's trademarks, are present on most tracks here, sometimes sung, other times recited. As always, they do not dominate the group's music but occur as brief interludes. On this album, they total about twelve minutes, under a fifth of the running time, fulfilling a similar role to instrumental solos, of which there are plenty of fine ones here, from all concerned. Live Wales—Hungary is available in two versions, a download containing nine tracks which run for eighty-one minutes, or a cassette version which omits two of the shorter Budapest tracks (neither with vocals, incidentally) totalling just over twelve minutes, and slightly reshuffles the order of the others to fit them onto the tape. On both versions, the sound quality is first rate, as befits the music itself. Either version is wholeheartedly recommended. Fourth Page continues to evolve, going from strength to strength with each release. These expanded versions of the group work very well; it will be interesting to see if either of them persists.