By DAN MCCLENAGHAN
January 15, 2004
Sign in to view read count 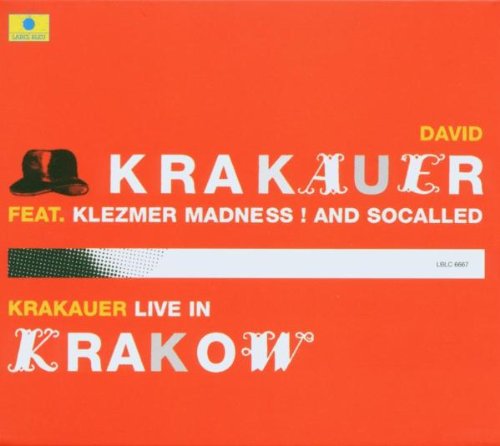 The world of MTV isn't klezmer clarinetist David Krakauer's milieu, but if it were, a video for "Table Pounding," the opening track of Live in Krakow, might include a scene of four black-clad, bearded, traditional-looking Jewish gents cruising the streets of Krakow in a low-riding car. This car is is equipped with a muscular sound system that transmits the songs sampled beat, shaking the traffic lights as they roll along, giving the store front windows a seismic shiver as well.

Live in Krakow features a pared-down version of Krakauer's Klezmer Madness! band, with electric guitar, accordion, bass and the leader's joyously inventive clarinet, joined by young beat master Socalled on samples and beatbox. Klezmer and samples, and odd mix of the traditional with the modernistic. Brilliantly done here.

Socalled's contribution to the disc can't be understated. It anchors the sound, gives Krakauer's klezmer—a music can swirl into frenzies—a gravitational tethering with the heavier electronic sound. The resulting mix of old (accordion, clarinet and bass) with the new (Socalled's bottom end and guitarist Sherly Bailey's wah-wah guitar texturing) is a facinating brew, filled with the freshness and vibrancy of a spirited, well recorded live set.

"Klezmer a la Bechet" tilts a Klezmerish nod of respect to New Orleans soprano saxophone pioneer Sidney Bechet, with Krakauer's wailing clarinet aided by Sheryl Bailey's electric guitar tang in front of a rhythmic drive that would make James Brown proud, while Will Holshouer's accordion shimmers around the edges like a silver ghost. Just one example of the life-affirming songs played of a night in the Indigo Club last June in Krakow, Poland—traditional Jewish music embracing a new century just fifty miles from the infamous Auschwitz.