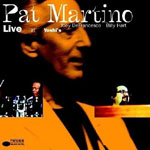 Ever since Pat Martino signed with Blue Note, we've been waiting for the release that would break things wide open while harkening back to those ground-breaking Prestige sides that had every young guitarist at the time shaking in his boots. Live at Yoshi's is definitely that record. With no gimmicks, special guests on revolving tracks, or overdubbed extras, Martino is at his expansive best, remarkably supported by Joey DeFrancesco on B-3 organ and Billy Hart on drums. The twosome of DeFrancesco and Hart alone has notched up the frequent gigging miles going back to a 1997 SteepleChase date with Doug Raney. Adding Martino to the mix just makes things all the more electrifying.

The trio kicks off "Oleo" and keeps the pots on throughout the last notes of the Martino original "Catch," goaded by a boisterous and supportive crowd. The most explosive moments come during "El Hombre," the title track from Martino's very first record back in the 1960s. The guitarist utilizes an unusual twang device, which then ushers in a heated period of suspension, his repeated off-the-beat- accents working up a froth as Hart crash and bangs in full support. "Mac Tough" comes on as a funky boogaloo, the kind without which this kind of record wouldn't want to be without. On the slower side, Martino is no less engaging, "Welcome to a Prayer" being especially solid. Not much more needs to be said, except that this particular trio needs to hang out like this more often!