By ERNEST BARTELDES
May 6, 2008
Sign in to view read count 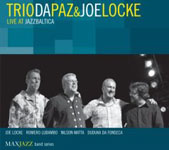 Jazz enthusiasts in Salzau, Germany were in for a great treat when New York-based Trio da Paz and vibraphonist Joe Locke had a memorable collaboration at Jazzbaltica in the summer of 2007. Locke fits in with the three longtime Brazilian musical partners quite well in a performance of material from the trio's palette, with the exception of one Locke original and a handful of standards.

The disc opens with "Dona Maria," drummer Duduka da Fonseca's composition that blends influences of more avant-garde songwriters from his native Brazil with American jazz sensibilities. Locke gives his contribution early on, prompting Fonseca to increase the dynamics of his drumming as acoustic guitarist Romero Lubambo plays discreet chords in between before taking over with his usual fluency.

Locke takes a break during "Pro Flavio" ("To Flavio"), a Lubambo composition that contains elements of baião and côco, two Northeastern Brazilian genres often explored by Hermeto Pascoal, an important influence on the guitarist's playing. The mood changes completely for Locke's mellow "Sword of Whispers," which features a beautifully executed solo from Lubambo, bassist Nilson Matta and Fonseca keeping a tight background for both the guitarist and Locke. Lubambo's "Bachião" (the title is a blend of "Bach" with "baião") contains an inspired duet between the author and Locke that draws thunderous applause from the audience.

Locke's final appearance at the concert is "All The Things You Are," the Hammerstein/Kern hit written for the 1939 musical Very Warm for May. The augmented trio takes the tune to Brazilian territory via an up-tempo samba beat and some spirited improvisation.

The music of Antonio Carlos Jobim has always been present in Trio da Paz's music (all having performed or recorded with the late maestro at different times in their careers and including his compositions on their studio recordings) and they pay homage to him (without Locke) with two songs: a subtle rendition of "Wave," with Matta and Lubambo taking turns with the melody, and the bossa nova "Look To The Sky" (originally titled "Olha Pro Céu" in Portuguese) that closes the concert.

Visit Trio da Paz and Joe Locke on the web.

Dona Maria; Copacabana; Pro Flavio; Swords of Whispers; Bachiao; Wave; All The Things You Are; Look To The Sky.