By JACK BOWERS
October 5, 2006
Sign in to view read count 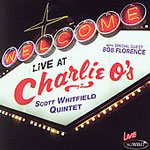 Besides leading two big bands, one on either coast, trombonist Scott Whitfield has put together a killer quintet that gigs regularly in the Los Angeles area and whose energy and enthusiasm come through loud and clear on this enjoyable concert date taped at Charlie O's nightclub in North Hollywood.

Whitfield's special guest on this happy occasion is another bandleader of note, Bob Florence, who divides time at the keyboard (four tracks apiece) with John Rangel. In terms of technique, tastefulness and proficiency, there's not much to choose between them, as each one is a resourceful improviser and attentive accompanist. Whitfield shares the front line with yet another bandleader, Roger Neumann, whose muscular tenor sax has a biting edge reminiscent of Illinois Jacquet, Don Byas or Jimmy Forrest at faster tempos, yet is near-Getzian on the ballads. Drummer Kendall Kay is the group's indispensable cheerleader, bassist Jennifer Leitham its unerring pulse.

Whitfield's solos are agile and exuberant but always purposeful, and clearly more influenced by Carl Fontana and Frank Rosolino than, say, J.J. Johnson or Bill Harris. The group performs Rosolino's charming waltz "Blue Daniel, along with four of Whitfield's original compositions and a trio of standards. The leader, who was once a member of the popular vocal group the Pied Pipers, sings on two of them—"Let's Get Lost and "You Go to My Head —and while he won't cause Tony Bennett to lose any sleep, his unpretentious voice and casual delivery are convincing in their own way. He sings on-key, has a sharp rhythmic sense and scats adeptly on "Let's Get Lost.

Whitfield's third hat is as composer/arranger, and it suits him every bit as well as the others. The breezy "Postage Due is immediately spellbinding, as are "A Message from the Captain, "Sunset Dreams and "Spring's Kiss, the last based on Jerome Kern's "All the Things You Are (and featuring Neumann on soprano sax). Speaking of last, the quintet exits with panache, exuding ardor and intensity on the venerable "Bye Bye Blues. Again, the solos are splendid, and one mustn't overlook Leitham's contributions in that area, as they are consistently impressive.

One of life's great pleasures lies in seeing and hearing jazz musicians on the bandstand, interacting, working things out and sharing the happiness and camaraderie when it all comes together. If one can't be there, perhaps the next best thing is listening to the result, as one can do on Live at Charlie O's. This is an exhilarating concert that you may enjoy (more than once) in your own living room or den.

Visit Scott Whitfield on the web.

Postage Due; Blue Daniel; A Message from the Captain; Let