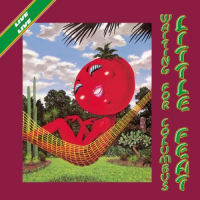 The art of slide guitar, that method of playing using a metal or glass tube and sliding it on guitar strings typically tuned to an open chord, such as Gmaj or Emaj, achieved its modern quasar in the Allman Brothers Band's leader, Duane Allman. He emerged, as if shot from a cannon, revolutionizing the style between 1968 and his death in 1971. Where Allman had a thick, muscular and slide guitar style, Lowell George had a sinewy finesse to his, sort of "that thin, that wild mercury sound" Bob Dylan talked about surrounding Blonde on Blonde (Columbia, 1966).

Like Allman, George established himself as a sought after studio guitarist and producer. Where the Allman Brothers Band was the star in Duane Allman's crown, George's crowning achievement was the Little Feat, a band with a scary eclecticism (sometimes ill-defined as a Southern blues band) driven by an equally scary, reckless and unpredictable talent. However, Little Feat did not start out as some errant Southern-fried knock off. George had a long musical career before his stint with Frank Zappa's Mothers of Invention that included his appearing as an oboe and baritone saxophonist on several Frank Sinatra recording sessions. Talk about a long strange Southern California trip.

Lowell George formed the folk-rock group the Factory with drummer Richie Hayward in the mid-1960s, recording for the Uni label. After the Factory's demise, George joined the Mothers of Invention where he met Feat's future first bassist, Roy Estrada. Zappa encourage George to form his own band after hearing George's ballad "Willin.'" With all of the stars in alignment, George and Estrada left the Mothers and formed Little Feat with drummer Hayward and Keyboardist Bill Payne in 1969. This union resulted in the eponymous first album (Warner Bros, 1971) and Sailing Shoes (Warner Bros, 1972). These original releases met with great critical acclaim but little commercial success.

Estrada left the band as was replaced by New Orleans-native Kenny Gradney. When guitarist Paul Barrere and percussionist Sam Clayton committed, the classic Little Feat sextet was born. The first release by the classic band turned out to be their finest studio hour Dixie Chicken (Warner Bros., 1973). During this period and after, all of the members of Little Feat found themselves in demand as session musicians, supporting many notable recordings. But, as it turned out, the studio is not where the collective Feat would shine. It would be on the stage.

During this period, the band began to delve into a jazz-fusion idiom that George was uncomfortable with. Unhappy with the shifting responsibilities within the band, George recorded his solo Thanks, I'll Eat It Here (Warner Bros.) in 1979, embarking on a tour to support the recording and declaring Little Feat Defunct. Lowell George died of a heart attack during this tour; a malady brought on ostensibly by his obesity and drug use. Down on the Farm (Warner Bros., 1979) was released shortly after his death, marking the end of Lowell George and Little Feat.

While the universal Little Feat story does not end with the death of Lowell George, the brilliant early synthesis effected by his interactions with Barrere and Payne sadly does. But the end does not occur before one of the best live bands was captured as such. Waiting for Columbus is the document of a touring band doing what they do best. When Lowell George and the rest of the group were on target, as they were on "Fat Man In The Bathtub," "All that You Dream," "Time Loves a Hero" and "Dixie Chicken," they made music of such aesthetic quality and artistic gravity that it is hard not to be excited listening to it 30 years on.

The maxima of this recording are many. It's opening, an a cappella "Join The Band" leads to the introduction followed by a nuclear kinetic shuffle that can only be laid down by Richie Hayward and Lowell George on cowbell/percussion. After the groove is established the entire band flows in with Paul Barrare's sleek slide guitar leading the way. "Fat Man In the Bathtub," that beautiful nugget of double-entendre from Dixie Chicken becomes a force of nature. Live, this song is transformed into a frenetically molten expression of desire, requite and humor. It perfectly captures all that is Little Feat. Aside from George and Hayward, Bill Payne shines on keyboards with a cosmically funky break resolving into the familiar coda.

But "Fatman" is not the only supernova in the show. The presence of the Tower of Power horn section perfectly augments the recording, especially Lenny Pickett's self-emolating tenor solo on "Day or Night" and his electric one-night-stand with Lowell George on "Mercenary Territory." Sam Clayton's conga opening to "Spanish Moon" immediately sets a drunk and steamy mood for the rest of the song as well as adding a tasty bit of percussion to "Dixie Chicken."

I don't remember church bells or the money I put down on the white picket fence of boardwalk or the house on the edge of town...

As all recordings tend to have a center point, ground zero on Waiting for Columbus is the "Dixie Chicken/Tripe Face Boogie" medley. The entire history of Little Feat is distilled into 17 minutes of rock and roll. Both the old (George) and new (Payne, Barrere) schools collide in an unexpected and rewarding cooperation that eclipses even the other superb pieces on the recording. Bill Payne opens with a Dr. John New Orleans groove that solidifies with Paul Barrere's tasty Fender patout and Clayton's percussion. Payne then presents the familiar piano opening followed by George's slide introduction and the first verse is born. Conclusion of the first verse brings Bill Payne's extended solo opportunity, where he touches on every major keyboard trend in rock and jazz.

Payne begins with a Cecil Taylor pounding, proceeding through a bit of stride, finally ending up in some Keith Jarrett new-age before breaking into a perfectly developed New Orleans vein that leads to the sublime Tower of Power Dixieland break. This is the pinnacle of the recording where everything works and the results are dense, boiling synergy. Another verse brings Paul Barrere's turn in the solo spotlight before Barrere and George duel prior to the final verse. Just following the last chorus, Richie Hayward takes a shot of adrenaline and kicks the piece into overdrive, roaring into "Tripe Face Boogie." This song begins with all Lowell George and ends with all Lowell George with Barrere/Payne in the jazzy "Day at the Dog Races" middle. No animosity here, this song is just a super quasar flaming out.

Waiting for Columbus is not a perfect recording. Originally released as a 2-LP set, the second side of the second LP (the one with "Don't Bogart that Joint/ Willin,'" "Apolitical Blues," "Sailin' Shoes," "Feats Don't Fail Me Now") was ill conceived in production. I felt this side of music a bit weak, though 30 years later "Sailin' Shoes" may be the best definition of the Lowell George Little Feat and certainly the best cocaine crash music on record. The new Little Feat is a very fine band in its own right. The seeds were sown in Waiting for Columbus by Payne and Barrere are readily apparent in all subsequent recordings. This music is less "Two Trains running" and "Rock and Roll Doctor" and more "Time Loves A Hero" and "Skin it Back." As a testament, Waiting for Columbus captures a collection of superb musicians just past the zenith of their accomplishment as a band. Waiting for Columbus is like Mozart's Requiem in that it is a magnificent torso, incomplete in structure standing as its own work of art.

Waiting for Columbus, Deluxe Edition was released in 2002 adding music and bringing that music released on Hoy Hoy (Warner Bros. 1981). These additions make this a near perfect live recording.