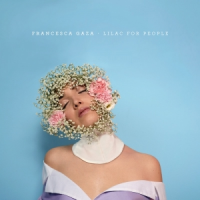 Lilac for People is the debut release from singer, composer and arranger Francesca Gaza, an artist currently based in Switzerland and Italy. Imaginative, beautiful and superbly performed, the album is inspired by the seasons and by the myth of Demetra and Persephone. There are two songs per season and, says Gaza, every story "is in my mind connected to my imaginary garden that changes over the cycle of spring, summer, autumn and winter."

"Strange Poet" (one of the summer songs) opens with a simple, almost childlike, piano motif. It is a delicate way to begin an album, but is indicative of Gaza's confidence as an arranger; she recognises that there's no need to overstate things, that "less is more" is no mere cliché. When she layers instrument upon instrument, creating a hard-hitting barrage of sound (on the mid-section of "Almond Tree" or the opening of "Red Box," for example) it's all the more effective because it occurs so sparingly. Her use of bass clarinet or baritone saxophone—played by Federico D'Angelo—is also effective, adding warmth to the music's lower register.

The beautiful "Lilac" showcases the band's ability to build and release musical tension as Gaza delivers an emotive vocal, centred on a plea to "Find me, find me, hopes abide by me." The familiar "I Get Along Without You Very Well" is granted a freshness by Gaza's harmonic approach in her arrangement, with voice and wind instruments interacting to emphasise the longing so eloquently portrayed by the lyric (although ending the song with the last line of the lyric rather than with an instrumental passage would maximise its emotional impact).

Gaza's standout number is "I Have Heard," a winter song. It comes as a relief from the emotional and musical intensity of the final section of "Purity" and, as with "Strange Poet," the song opens with a simple piano motif. Luca Sguera's piano is a pitch-perfect accompaniment for Gaza's voice—the wordless ensemble vocal on the final minute or so is another original touch. On numerous tracks, Björk and Maria Schneider influences can clearly be heard, which Gaza acknowledges, but "I Have Heard" is reminiscent of two other women—Joni Mitchell (her early 1970s period, around the Blue album), and Laura Nyro. Like Mitchell and Nyro, Gaza has the talent to create a song that strikes straight at the heart.

"I'm in love with the film I'm in" sings Gaza on "Strange Poet." It's a film that is just beginning, with a cast of players that will hopefully stay together to bring Gaza's future musical visions into being.

Strange Poet; Almond Tree; Red Box; Teach To Sing; Lilac; I Get Along Without You Very Well; Purity; I Have Heard.