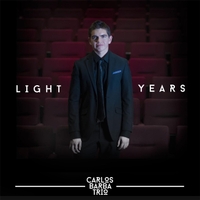 Stitching together a diverse blend of influences -classical, Latin, and experimental -the Carlos Barba Trio consistently engage and innovate on their new album Lightyears. While the Texas-based group is rooted in improvisation they never lose sight of accessible melodies, dynamic hooks, and emotional depth. This is cerebral jazz with a beating heart, introspective at times but never detached and incomprehensible. Barba is a gifted pianist with a poet's ear for instrumental dazzle.

"Bluebird" opens with thumping avant-garde clatter that eventually finds its path in Barba's silky smooth piano playing. The sounds that emanate from Barba's keys are downright gorgeous like the rising sun on the first day of summer. Erik Unsworth's hypnotic bass add layers of rhythmic depth. Just as evocative is "Labyrinth," which deserves its mysterious title from Barba's incandescent performance, whose piano flickers like light reflecting on a lake. It's a moody, dreamy track, one for late-night drives.

However, not everything on the album aims for a chill vibe. The rambunctious "There Is No Greater Love" captures the invigorating chemistry of Barba and his fellow musicians. Barba's electrifying piano, Unsworth's jamming bass lines, and Lawrence Brown's robust drums crackle with infectious enthusiasm. Their affection and attention to their craft simply sizzles, making this trio Lightyears better than many of their peers.

Lightyears; Dreams; Bluebird; Labyrinth; Orange; The Lake; There Is No Greater Love.