By MARK SULLIVAN
November 22, 2018
Sign in to view read count 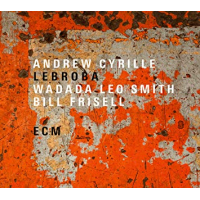 Veteran drummer Andrew Cyrille—best known for his long association with the avant-garde pianist Cecil Taylor—made his ECM debut as a leader with the quartet date Declaration Of Musical Independence (ECM, 2016). This is a trio session with chameleon guitarist Bill Frisell returning, along with legendary trumpeter/composer Wadada Leo Smith. Frisell is the glue that binds both sessions together: since the previous album he has played duets with Cyrille, but this is his first meeting with Smith; Cyrille and Smith have played together since as far back as the 1970s.

The group dynamic is naturally a bit different. With a horn in the mix—which tends to be heard as the lead voice—Frisell spends more time as an accompanist. He contributes only one composition this time, the opener "Worried Woman." It has a slightly folkloric quality—at one point reminiscent of the traditional tune "Black Is The Color (of My True Love's Hair)"—with Frisell and Smith in conversation, accompanied by Cyrille's gentle drumming, the pulse always present but mostly implied rather than explicit.

Smith's "Turiya: Alice Coltrane Meditations and Dreams: Love" provides the longest track. As the title implies, it is a reflective portrait of pianist/organist/harpist Alice Coltrane. The leader even plays a drum solo, with no histrionics to break the mood. Cyrille composed the title tune as well as closer "Pretty Beauty." Both lovely, lyrical pieces that are not at all drum-driven. Frisell has an especially beautiful unaccompanied turn on the closer. There is only one collective composition this time out. "TGD" is a dark rubato exercise: still reflective, but also a vehicle for rambunctious electronics from the guitar and keening trumpet calls.

It seems odd to say this about such a well-established player, but both of these ECM discs make a strong argument for Andrew Cyrille as composer, bandleader, and even drummer. He seems to have found a new voice, which is a delight to hear. Both Frisell and Smith shine in this context, supporting Cyrille's concept while also making strong individual contributions.