Charlie Parr: Last of the Better Days Ahead

By Doug Collette
August 7, 2021
Sign in to view read count 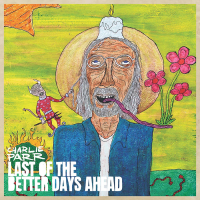 Country-blues in its most vintage form, Last of the Better Days Ahead is not appreciably different from Charlie Parr's last couple albums, Dog (Red House Records, 2017) and Charlie Parr (Red House Records, 2019). As on those records, his economical playing meshes with the deft, spare accompaniment, almost surreptitiously evoking people, places and moods with such vivid skill(s), the Minnesota native comes across like a short story writer with a guitar.

It's an altogether unassuming approach Parr maintains throughout the sixty plus minutes of this Smithsonian Folkways label debut. Fittingly commencing with the quick circular patterns of this title song, Parr ascertains just the proper balance of playing and singing so each component of such a track is equally compelling. His wry phrasing as he sings there and on the similarly-conceived "Walking Back From Willmar" matches the angular guitar figures he spins so effortlessly and, on "Blues for Whitefish Lake, 1975," the vocal is also a mirror image of the unpredictable riffing.

In the primarily acoustic arrangements of such cuts, the uninitiated listener may think what's playing is a field recording from a half-century ago. But that's not because "Anaconda," just to name one, sounds dated, but only that it's the definition of authentic, based on how honestly Charlie Parr has processed his absorption of the blues. Paramount in his approach is the savvy of the working musician who has taught himself how to pace albums (and performances) to extrapolate the dynamics in the individual songs and infuse the cumulative momentum into the overall collection. He has mastered the craft of imbuing the sequence of material with its own intrinsic logic.

Take "Everyday Opus," for example. The ache in Parr's voice is palpable as he unfolds an ominous narrative sounding like a reflection upon a life of quiet desperation. The main character in this cinematic depiction encounters a daunting and altogether insular anonymity, yet his persistence and resolve ultimately win out, much like the chord progression resolves itself as the author plays it at track's end. The quiet around the performance only amplifies the solitude of the scenario, but that same tranquil atmosphere permeating the recording studio turns concrete via the generosity of spirit in the cryptically-titled "817 Oakland Avenue."

If the empathy and altruism inherent in Charlie Parr hasn't become readily apparent by the arrival of this final cut of the eleven here, a protracted wordless reverie titled "Decoration Day" makes it plain. Below the almost imperceptible shift of guitar patterns lies the steady pulse of co-producer Liz Draper's heartbeat bass (she co-produced here with Charlie and Erik Koskinen). Drummer Chris Grey adds unobtrusive accents to supply a tacit anchor of rhythm when the Draper uses a bow and, in so doing, the percussionist simultaneously makes room for keyboardist Tasha Baron to add dashes of color .

For an album so full of reflection as this one, nearly sixteen-minutes of instrumental work as a closing is a ripe opportunity for listeners' contemplation of what's come before. Perusing the lyrics in the thirty-two page booklet is worthwhile at this point, as is noting Charlie Parr's own observations on the songs (even if certain of them hint at some poetic pretensions). Either option is certainly preferable to any attempt at absorbing the voluminous amount of flowery prose with which that content is juxtaposed.

In the end, none of said hyperbole speaks so eloquently as black and white photo inside the digi-pak of Last of the Better Days Ahead. That shot in and of itself is as (deceptively) simple and evocative as the music contained herein.

Last of the Better Days Ahead; Blues for Whitefish Lake, 1975; Walking Back from Willmar; Anaconda; Everyday Opus; On Fading Away; 817 Oakland Avenue; On Listening to Robert Johnson; Bed of Wasps; Rain; Decoration Day.