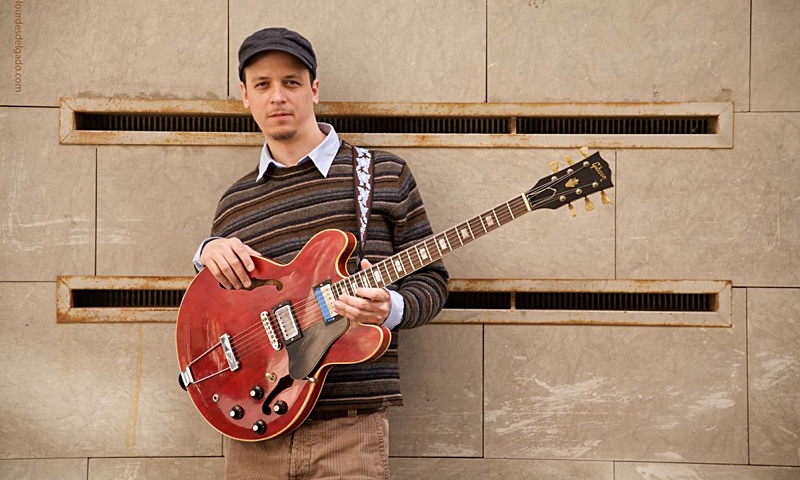 I'm an optimist. I believe in people and I believe in music, and so we're just going out and doing it. —Kurt Rosenwinkel

"It's the busiest I've ever been," Kurt Rosenwinkel happily declares during a rare week of down time at home in Berlin between tour legs. This would seem like quite a statement for someone established as a jack of many trades—luminary guitarist, music teacher, technological experimentalist and bandleader in several genre-hopping ensembles. These recent months have seen him further expanding his resume to include lead singer, lyricist and label boss. He describes it as a crazy time, but couldn't be more excited about the ways things have been converging (some of them a long while in coming).

The year kicked off with the release of his Brazilian-tinged fusion opus Caipi (Heartcore, 2017), an endeavor that took a decade taking shape and has been breezily knocking listeners' expectations sideways. He's formed a new band around that concept and taken it through the States, Japan and China, alternating with a couple brief jaunts through Europe with a different trio. After this break will come a return to Canada with plans for some studio work and more American dates further on, making room along the way for a couple Standards Trio gigs and a sit-in with The Bad Plus at the Montreal Jazz Festival. Busy indeed, but Rosenwinkel says it's "in the best way possible."

"Sometimes it takes a while for those big changes to sort of culminate, you know," he muses in describing these shifts, including his recent retirement from teaching to put more energy into the newly-launched Heartcore Records. "It's a marvel to see how life just forms itself—it makes crystals in caves and stuff, and it does that to your life too. There was something very crystalline about it, the way my life changed in pretty much every fundamental way at the same time about a year ago. So it was a real renewal and an exciting rededication to the most deeply rooted thing that I can do right now. I'm very fortunate that things arranged themselves for me to be able to do it." Partly it's fortune, but clearly it's also a matter of having patience and helping things unfold at the right pace.

It's pretty apt that the label is named after his early album Heartcore (Verve, 2003), which made a defining step in the guitarist's early evolution, even while some listeners had no idea how to regard its blend of jazz and electronics. Rosenwinkel seems to be having better luck this time around—if nothing else, his listeners should know not to get too tied to expectations by now.

"I know there'll be people who think they don't really want to accept [something unexpected], but you know, you get used to it," he says with a quiet laugh. "Almost everything I've done has been met with that kind of reaction. When I came out with Heartcore, everybody fucking hated it. Two-star reviews across the board, no gigs, nothing. With hindsight it would probably be a surprise for some people to hear that, the way that album is considered now. So it's nothing new to me to have that kind of reaction. But we've had some incredible responses for Caipi.

"If I had done another quartet jazz album, there'd be people saying, 'why doesn't he do something new?' So, you know, you can't please everybody. And I feel like people, in their initial reactions to things, are much more extreme than after the dust settles and they can get perspective." If something took so long to present itself to the artist, it's no surprise that it demands some openness and attention from the rest of us as well.

Rosenwinkel notes a similar dynamic with this newest release, even if the time frame is somewhat different. " [Heartcore] took two and a half years, and I remember feeling aghast at how long it was taking," he recalls. "But that one had money from a record company and a deadline that kept getting pushed back, so I had a real keen sense of expectation on finishing. Caipi didn't have any demands placed on it, externally, at all. For the first half of its life, I didn't even know that it was going to be a record. It was just songs that were kind of formulating in my studio. And then when I realized that it was an album of music, then I was working on it and thinking about it as such—but it was still happening alongside other albums that I was doing, more on the surface.

"There'd be projects where you would just say, 'hey, let's make a big-band record'—okay, boom, there it is. 'Hey, why don't you make a record of all these songs that you have for quartet?' I'd say, 'oh yeah, that's easy, I've got two albums' worth of songs just sitting here and I've got a band and, sure, why not?' And there were also sort of secondary thoughts in my heart of hearts, because I was secretly thinking about Caipi all during that time. Not to say that I didn't put everything into those albums, but I always knew there was this big whale that was swimming under the ocean waiting to come up."

As Rosenwinkel makes clear, though, the new work isn't a departure from his past so much as an unfolding of elements that were already there. He started occasionally adding wordless vocals as far back as his first mid-nineties recordings, then began electronically processing his voice as well with 2005's Deep Song (Verve), so the appearance of songs with actual lyrics is a logical enough step by this point. "I'll put it this way," he says. "Now people can understand me better, who I am and what my makeup is. I started out writing and singing songs, so for me it's kind of like going back to a more fundamental place. I recognize it's definitely not something that I've done on albums before, singing lyrics, but all through these years I've always had songs that come out. After I would write something like 'Zhivago,' maybe the next day I'd write a song with lyrics and just not put it on an album. So it all goes together in my mind."

The words are one defining facet of Caipi, which shows him and a backing cast crooning in an upbeat mix of English and Portuguese. The prominent feeling is simply one of joy—it's music soaked in the tropical sun, shaped by philosophical thoughts and abstract images of life, love and nature (not to mention the tricky-to-pronounce cachaça cocktail that provides its title). He describes the process as both natural and surprising, much like the album itself: "the way I visualize my musical world is like a solar system, in a way. In terms of my songs, I don't decide what I'm going to write. It just comes through me and I look at it and say 'wow, that's cool. Where did that come from?' You write a song and now there's a new star in the sky. Then you write another song and think, 'oh, it's kind of close to that star too.' And then more come out over time and you realize, hey, that's actually a constellation. They go together and they have a relationship, a gravity between each other. So that's an album.

"Then sometimes a song comes through and it's just this one star alone. It's not related to anything for a while, but maybe in five years another one might appear next to that one that's been alone. So that's kind of how it works—I'm just looking up and stargazing. ... as soon as I identify songs that go together, as soon as I realize they're a thing, then I have a name for it. So I started calling those songs Caipi songs. I thought, 'oh, you know, they're kind of related to Brazil and rock and I love caipirinhas.' So I just started calling it Caipi music."

Since the recording is a mostly-solo effort with key guest appearances where necessary, it stands as both a defining career milestone and a springboard to the future. The next inevitable step had to be forming a live band to see what new fireworks would result. Rosenwinkel is thrilled that this group has already hit the ground running for this material and also the next not-exactly-companion-piece still to come. Without giving much away, he vaguely hints that the emerging followup will be "kind of related in some ways, but different"—and close enough that we shouldn't have to wait until 2025 to enjoy it.

Whatever picture the next constellation makes, this blossoming sextet will be the key. "This is going to be the band for the next evolution of my music," he asserts. "We're going to be recording over this summer. I'm so psyched about the band because everybody just—we feel like a family. On the road we just have so much fun together, and everybody's very caring. Musically it's just amazing. We feel like a cult. I laugh—somebody made that joke and said 'oh, you're so together, it's like you're a cult.'" Thankfully he quickly adds that it's the non-creepy kind and "I didn't have to brainwash anyone." Such is the benefit of choosing partners already in the right head space to begin with.

He elaborates, "it's definitely all about the ingredients. ... I was so lucky that I was able to feel and make the right intuitive choices about who to put together. When we all came together for the first time, it was already fully formed as a band. Everybody knew the music, we started playing and it sounded exactly like the record, which was an amazing feeling. We started from that point and now we're beyond it. Everybody is feeling more free to put more of themselves into it."

There's a wealth of instrumental talent already in the group, which features Olivia Trummer (piano/voice), Frederico Heliodoro (bass/voice), Antonio Loureiro (percussion/voice) and drums by Bill Campbell - Guitar. Nonetheless the leader has special praise for Pedro Martins, whose Brazilian roots made him a key contributor to Caipi and who's also emerging on his own as the next signee to the Heartcore roster. "He's a brilliant, majorly talented young fellow from Brasilia," Rosenwinkel enthuses. "He's a guitarist, pianist, drummer, bassist and a vocalist—a real bad boy. And he's an amazing composer as well. We've been working on his album and it's going to be incredible. We're halfway mixed and it'll be the next release. I can't wait for people to hear it."