By JAKOB BAEKGAARD
October 23, 2013
Sign in to view read count 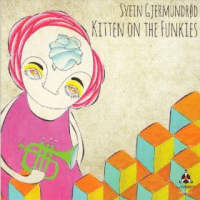 The famous folk singer Pete Seeger has once stated that he doesn't listen to recorded music. This underlines the fact that it is actually possible to live a life in music without recording. However, the ghost of recording will often come back to haunt a musician and it is no secret that Seeger has recorded plenty of music himself.

To call Norwegian trumpeter Svein Gjermundrød a late bloomer in the record industry would be an understatement, but at the ripe age of 60, he finally releases his debut: Kitten on the Funkies. Even though he hasn't recorded as a leader before, Gjermundrød has played and written music for many years and this is reflected by the age of the compositions, which date back as far as 1974. On the album, he teams up with singer Hanna Gjermundrød, organist and keyboard-player Steinar S. Nickelsen and drummer Eric Nyland and together they create a potent and varied stew of sounds.

Gjermundrød is a refreshing voice—both as an instrumentalist and composer—his brand of swinging Scandinavian soul jazz is balanced by his poetic balladry. "Mdaisaa" is a spellbinding duet with Hanna Gjermundrød where her multilayered voice spins a web around his trumpet lines. The piece is punctuated by silence and Gjermundrød tells about his experience of recording it: "We stopped playing for a few seconds during the improvisation and started playing again at the exact same moment—without visual contact. Magical!"

"Mdaisaa" was composed live in the studio and the album also contains other fresh compositions like the funky "Mindful" and "Aroec" where the influence from Gjermundrød's old hero, Herb Alpert, shines through in the smooth Latin touch.

Kitten on the Funkies reflects a long life lived in music. Gjermundrød's creativity certainly hasn't diminished with age and this is a debut album that would make most musicians proud. One can only hope that Gjermundrød has gotten a taste for recording, but even if this will be the only statement from him, he will be sure to have a left his mark with a beautiful and original album.