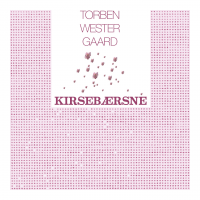 Torben Westergaard is nothing if not restless. Latin music has been the most defining element of his career to date, though explorations such as his Tangofied series have also happily bridged music and musicians of South America with those of his native Europe. This album's immediate predecessor, Heart Tunes (self-produced, 2018), made an unexpected detour into straightforward sunny dub-ambient territory instead. Where does a curious bassist go after that, one might ask?

If you guessed "the world of children's music," give yourself a cigar. From the chirping birds and tooth-achingly cute violin waltz that kick things off, Kirsebærsne (meaning "cherry-blossom snow") is a pure fanciful daydream. Key credit also goes to collaborator and children's-book author Tina Sakura Bestle, who steps in to sing on the closer as well. Gypsy-jazz strings and light tropical rhythms are garnished with music-box chimes, whistles and all kinds of playfulness. Westergaard even steps up to the mike on several lighthearted singalongs and shows his voice to be as inviting as his bass work. You don't have to understand the words in Danish to hear the unassuming charm behind them.

The result is a sunny affair open to all ages. Several pieces have their share of candy and rainbows, while a couple classier tangos and sambas increase the appeal for adults in the process. Kirsebærsne manages to stay innocent without being specifically childlike—there's plenty of wide-eyed fun and good humor, but it all comes out so lighthearted and likable that there's very little danger of cloying. It's a quaintly appealing curio full of bright spirits, wholesome and breezy as a stroll to the ice cream shop.