By John Kelman
October 7, 2011
Sign in to view read count 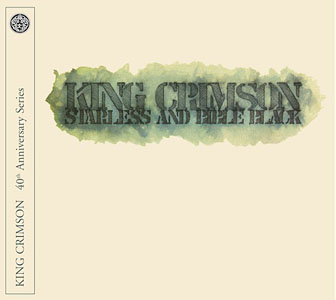 They may be rolling out slower than fans would like, but given the superlative work that Porcupine Tree's Steven Wilson has been doing to bring the decades-old King Crimson catalog into the 21st century—creating vibrant new stereo and 5.1 surround sound mixes, with Crimson co-founder/guitarist Robert Fripp's direct involvement and/or approval—he can be forgiven for taking the extra time to get them just right. So far, Wilson has managed to respect the original material, while creating more three-dimensional audio landscapes and a stunning degree of transparency that has made the entire series—but, in particular, 1970's Lizard (DGMLive, 2009) and 1971's Islands (DGMLive, 2010)—sound the way they always should have. Starless and Bible Black is another outstanding addition to the 40th Anniversary Series, with previously unheard depth and clarity, and a whack of bonus material that makes it the undisputable definitive edition.

By 1973, Fripp had been through more personnel than most, finally settling in on an incarnation that would remain stable longer than any other Crimson to date. After the paradigm shift of that year's Larks Tongues in Aspic (Island), in addition to being the most aggressively guitar-heavy Crimson yet, this lineup introduced the new textures of David Cross' violin and viola, and the rhythm section to end all rhythm sections, with thundering bassist John Wetton and drummer Bill Bruford, who'd left fellow art-rockers {Yes}} on the cusp of massive mainstream success, to play with the more improv-heavy (and just plain heavy) Crimson. Jamie Muir was gone, but Bruford, in addition to his remarkable ability for polyrhythmic complexity and an instantly recognizable sound, had learned much from the departed percussionist who had moved to a monastery in the Scottish Highlands. If guitarist John McLaughlin's Mahavishnu Orchestra approached the power of rock from the context of jazz's improvisational freedom, this version of Crimson came at it from the flip side.

Tracks such as the opening "The Great Deceiver" and "Lament" rock harder than anything Crimson had done before, while the mellotron-heavy "The Night Watch" made clear there were still trace elements of the symphonic group that shook the world in 1969 with In the Court of the Crimson King (DGMLive, reissued 2009). What makes SABB the next logical step from LTIA is its reliance on free improv as a context for songwriting. Crimson shows always weighed heavily on extemporization, but here, five of the album's tracks were actually recorded in concert, then taken back to the studio for additional overdubs and tweaks—and, in the case of "The Mincer," lyrics as well.

But the real achievement and greatest success of SABB is "Fracture," Fripp's episodic, 11-minute whirlwind of rapid-fire whole-tone guitar gymnastics, bolstered by Wetton's overdriven triceratops-meets-tyrannosaurus rex attack and Bruford's combination of powerful kit work and newfound expressiveness on percussion. Back in the day, it was the tune guitarists aspired to play but most couldn't, and Wilson's mix—as with this entire reissue—makes it cleaner, clearer and, well, heavier than it's ever sounded before.

The wealth of bonus tracks on the CD and DVD—most available elsewhere on King Crimson Collector Club releases—include two songs that never made it to a commercial record: the phonetics-challenged "Dr. Diamond," first released on The Great Deceiver (DGMLive, 1992) box set; and the more flat-out rocking "Guts on My Side," previously only available on a KCCC audience recording from Udine Italy. Neither song stands up to the material around it—and that includes the improv tracks from the original SABB, among them the pastoral "Trio," the funky "We'll Let You Know" and the quietly angular "The Mincer." But for those who don't already have those releases, they create—along with other bonus live material on the DVD that includes the original improvs that led to SABB's finished tracks, with the music that bookends them as well—a more complete and concise picture of where this group was, in 1973-74.

Even better—albeit frustrating in its relative brevity—is the video footage from Crimson's June, 1973 Central Park Appearance—LTIA's "Easy Money" and the improv, "Fragged Dusty Wall Carpert," which give Crimheads old enough to have been there a nice slice of nostalgia and, for those who aren't, the opportunity to witness the group in its sheer unbridled power. Now, if only there'd been some video footage of the group performing "Fracture."

But even without a video performance of "Fracture," Starless and Bible Black (40th Anniversary Series) continues the winning combination of Steven Wilson and Robert Fripp, and their reinvigoration of the Crimson catalog—an unbroken winning streak of definitive editions that are only predictable, at this point, in their documentary completeness and stunning sonic clarity.