By JIM SANTELLA
August 9, 2006
Sign in to view read count 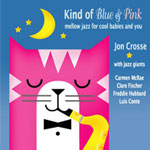 What a terrific idea! Gather several jazz veterans in the studio and have them interpret songs from our childhood in a true straight-ahead jazz spirit.

Jon Crosse, a multi-instrumentalist who has served as Paul Anka's musical director for many years, heads up both sessions with a soulful spirit and a swinging posture. His solo woodwind voice comes through clearly with interesting twists and turns on these old themes. None of these songs sound as old as they are. Instead, Crosse brings us fresh arrangements that highlight the talent in the room, and these treasured children's songs are improvised with class.

Fischer makes things happen. His rhythmic ideas take a simple song like "Twinkle, Twinkle, Little Star and push it to the top of the album's highlight reel. With bassist Putter Smith and percussionist Luis Conte on board, the pianist and Crosse (on tenor) give this tired old song new life. Later, Fischer's solo piano portion and counterpoint for "Brahms' Lullaby are chock-full of harmonic surprises.

Hickory Dickory Dock, the session's high point, finds both McRae and Hubbard in fine form. McRae, who passed away in 1994, gets the short straw, however, as her voice remains in the background here and on her two other appearances. It's not the way she sings, but the microphone balance that causes the problem. Nevertheless, her unique voice and natural delivery, coupled with the band's upbeat interpretation, make this children's song turn heads.

Three Blind Mice has been done successfully in a jazz frame of reference before. Art Blakey sure did something interesting with it, and so have several others. Here, Crosse joins pianist Dave Witham, bassist Mel Graves and drummer Paul Kreibich for a light romp that features his flute, piccolo and soprano saxophone with plenty to say. The arrangement resembles Blakey's; Crosse's three instrumental tracks converse with each other in improvised fun.

Rain, Rain, Go Away and "Rock-a-Bye Baby may be the most familiar children's songs that we remember, but several others on the program give them some serious competition. Crosse interprets both on tenor with a piano trio in tow. His tenor arrangements here and elsewhere show his best side. You can feel the genuine passion oozing naturally.

While several of its slower ballad arrangements seem designed to put little boys and girls to sleep, Kind of Blue & Pink holds many pleasant surprises for the mainstream jazz lover. Fischer's spontaneity and Crosse's soulfulness combine to produce an enjoyable family affair.